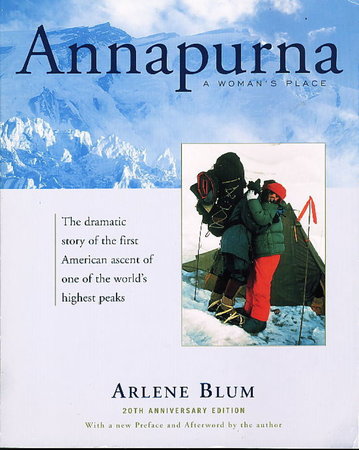 San Francisco: Sierra Club Books, (1998.). SIGNED - The dramatic story of the first all-women's ascent of one of the most challenging peaks in the Himalayas, by the leader of the expedition: In 1978 Arlene Blum led an all-womenÕs expedition to the North Face of 26,545 foot Annapurna in Nepal. On October 15, Irene Beardsley Miller and Vera Komarkova, along with two Sherpas, Mingma Tsering and Chewang Rinjee, reached the top. Miller and Komarkova were the first women and the first Americans to stand on AnnapurnaÕs summit. Along with American and Nepalese flags, they unfurled a banner with the expedition slogan, ÒA WomanÕs Place Is on Top.Ó Foreword by Maurice Herzog.The Twentieth Anniversary Edition with a new preface and afterword by the author. INSCRIBED on the half title page by Blum "To . . . Success on Top!" A somewhat oversized trade paperback illustrated with many photographs. Bibliography, index. 258 pp. ISBN: 1578050227.