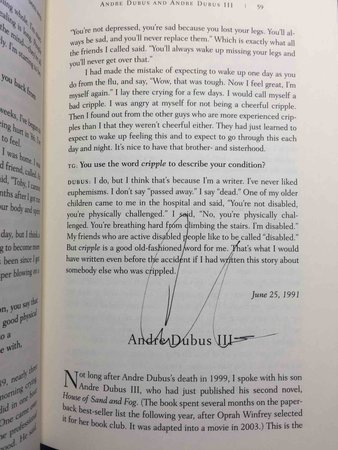 ALL I DID WAS ASK: Conversations with Writers, Actors Musicians, and Artists.

New York: Hyperion, (2004) dj. SIGNED hardcover first edition - A collection of thirty-nine interviews by by the award-winning host of NPR's interview program 'Fresh Air.' Each selection is preceded by an explanation from Gross of why each guest was on the show and the thinking behind some of her questions. SIGNED by THREE of the guests: Ann Bannon at "You Will Not Find the Word 'Lesbian"; Walter Mosley at "We All Die" and Andre Dubus III at his interview. Also included are interviews with John Updike, Isabella Rossellini, Conan OÕBrien, Samuel L. Jackson, Johnny Cash, and Nicolas Cage, Sonny Rollins, Mario Puzo, James Baldwin, Maurice Sendak, Eric Clapton, Joyce Johnson, Andre Dubus and others. Introduction by Gross. 353 pp. ISBN: 1-4013-00103.