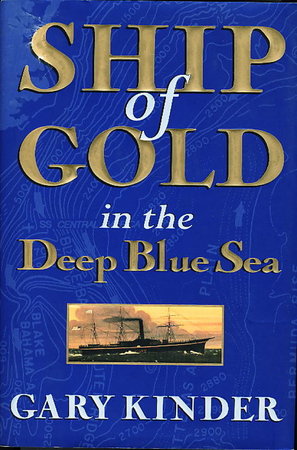 SHIP OF GOLD IN THE DEEP BLUE SEA.

New York: Atlantic Monthly Press, (1989.) dj. Hardcover first edition - "In September 1857, the SS Central America, a side-wheeler carrying 600 passengers returning from the California Gold Rush, foundered in a hurricane and sank 200 miles off the Carolina coast. Over 400 lives and 21 tons of California gold were lost.... In the 1980s, a young engineer from Ohio [Tommy Thompson] set out to do what no one had been able to do: establish a working presence on the deep-ocean floor... October 1989 they sailed into Norfolk with the recovered treasure: gold coins, bars, nuggets, and dust, plus steamer trunks filled with period clothes, newspapers, books and journals and even an intact cigar." This is the fascinating story of both the disaster at sea, based on eyewitness accounts, and of the most incredible efforts to recover the 'greatest treasure ever found.' Frontispiece, 507 pp. ISBN: 0-87113-4640.