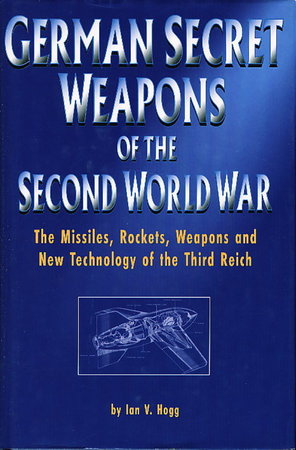 GERMAN SECRET WEAPONS OF THE SECOND WORLD WAR : The Missiles, Rockets , Weapons and New Technology of the Third Reich.

London & Pennsylvania: Greenhill Books / Stackpole Books, (1999.) dj. Hardcover first edition - A detailed examination of the revolutionary new weapons developed by Germany during WW 2, incl. V-Weapons - "The sheer magnitude of the secret weapon projects of the Third Reich is now revealed in this comprehensive study written by one of the world's great experts on weaponry, which captures both the reality behind the weapons actually produced and the intentions behind projects still in their infancy when the war ended." Illustrated with line drawings and photographs. List of German code names, index. 224 pp. ISBN: 1853673250.

Condition: Near fine in near fine dust jacket (short closed tear to back cover of dj.)