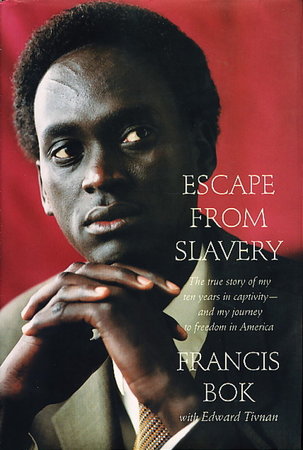 ESCAPE FROM SLAVERY: The True Story of My Ten Years in Captivity--and My Journey to Freedom in America.

New York: St Martin's, (2003.) dj. Hardcover first edition - From the dust jacket: "May 1986: Seven-year-old Francis Bok was selling his mother's eggs and peanuts near his village in southern Sudan when Arab raiders on horseback burst into the quiet marketplace, murdering men and gathering the women and young children into a group. ... Francis and others were taken north into lives of slavery under wealthy Muslim farmers. ... After two failed attempts to flee--each bringing severe beatings and death threats--Francis finally escaped at age seventeen....[He] persevered through prison and refugee camps for three more years, winning the attention of United Nations officials who granted passage to America. Now a student and an antislavery activist, Francis Bok has made it his life mission to combat world slavery." Map. 284 pp. ISBN: 0-312306237.