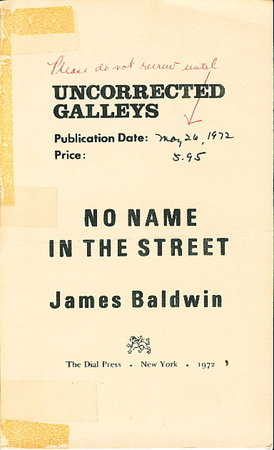 NO NAME IN THE STREET.

New York: Dial Press, 1972. First edition - Uncommon advance issue (cover says "Uncorrected Galleys") of this very personal book by one of the most important African American novelist, essayist and playwright - this deals with the history of the 1960's and early 1970's. He remembers the Harlem childhood that shaped his early conciousness, the murders of Martin Luther King and Malcolm X, his sojourns in Europe and in Hollywood, and his return to the American South to confront a violent America, including the killing of George Jackson, the trial of Angela Davis. 190 pp.

Condition: Very good (tape reinforcement to the spine, handwritten notation on the cover 'please do not review until' with an arrow down to 'May 26,1972.'