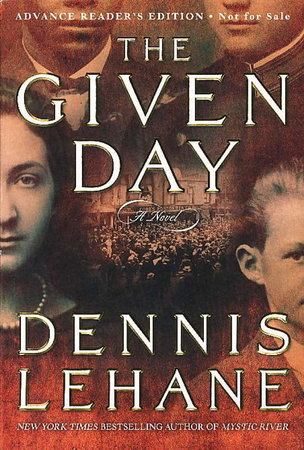 New York: Morrow, (2008.). SIGNED first edition - Complex and absorbing historical novel set in Boston and elsewhere in the years during and after the Great War, and culminating in the 1919 Boston Policemen's strike. The story of two families, one Irish American in Boston, the other African American in Oklahoma, this paints a vivid picture of a world undergoing changes hardly understood at the time. Babe Ruth, the Great Molasses flood in Boston, writer Jack Reed, anarchists, Calvin Coolidge, the young government lawyer John Hoover and the Spanish flu that killed so many all appear in this novel. The NY Times in its review stated "No more thinking of Mr. Lehane as an author of detective novels that make good movies (ÒGone, Baby, GoneÓ) and tell devastatingly bleak Boston stories (ÒMystic RiverÓ). He has written a majestic, fiery epic that moves him far beyond the confines of the crime genre." SIGNED on the title page. 704 pp.

Condition: Fine in illustrated wrappers with French flaps (as new )