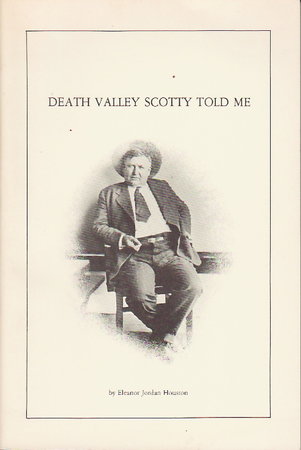 Death Valley, California: Death Valley Natural History Association, (1985, c. 1954.). From the author's preface:" Death Valley Scotty is a legend - one of the few who became legends while they lived. To the author and others who knew him, he was a very real, forceful and unique personality. Even in his eighties, he could hold a group spellbound with his tall tales, his individual phrasing and his ability to puncture a stuffed shirt with a few vivid words. Yet he never capitalized on his exploits, and he never hurt anyone, even those who called him a faker and harder names." Although basically a con-man, Scotty did not build and never owned the incredible edifice called Scotty's Castle in a remote canyon in northern Death Valley, California, although it was his home for many years - and his story is inextricably entwined with this desert oasis. Illustrated with photographs. 127 pp.

Condition: Near fine in cream colored wrappers with a photograph of Scotty on the front cover.