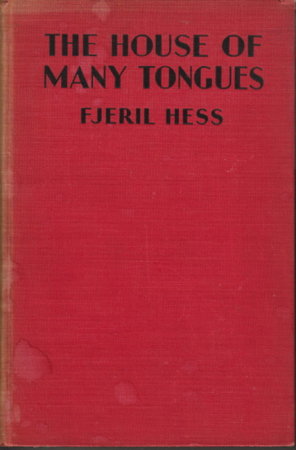 THE HOUSE OF MANY TONGUES.

New York: Macmillan, 1935. Hardcover first edition - "More social service work in Prague" - A sequel to 'The Mounted Falcon' which told of the adventures of a "vivacious, adventurous, friendly American girl who finds herself in golden-towered Prague in the days after the war, during the shaping of the new republic of Czechoslovakia." In this novel, she and her friends establish a youth hostel for students from many countries who are attending the University of Prague - but the lightheartedness is offset somewhat by hints of the coming of World War II. Quite a bit harder to find than "The Mounted Falcon." Illustated with drawings at the head of each chapter by Edward Cassell. 228 pp.

Condition: Good condition in red cloth with black lettering - sunning to the spine, a few splotches to the covers, binding is tight and straight, contents are very good.