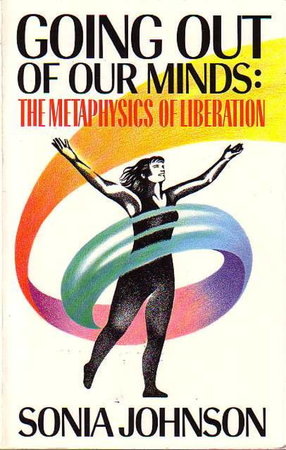 GOING OUT OF OUR MINDS: The Metaphysics of Liberation.

Freedom, CA: The Crossing Press, (1987.). SIGNED first edition - A discussion of the path that took Johnson from Mormon housewife to a proponent of radical feminism, and especially of her last five years in the feminist movement. . After being excommunicated from the Mormon church in 1977 for supporting the Equal Rights Amendment, she became increasingly involved in the women's movement until the failure of the ERA, led to her renouncing working within the system as she came to believe that women must be "out of their minds" and should work outside the "patriarchy" to effect societal change. INSCRIBED on the title page "Dear .... keep on breaking free" and dated in the year of publication. Notes 359 pp. ISBN: 0-895942402.

Condition: Good in illustrated wrappers (would be near fine except that several pages have yellow highlighting.)