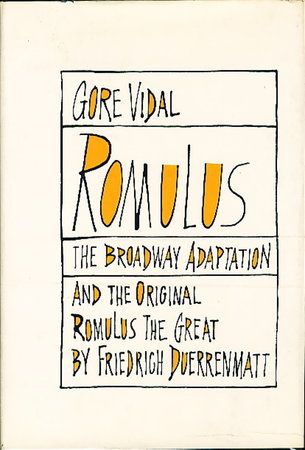 ROMULUS: The Broadway Adaption and the Original ROMULUS THE GREAT by Friedrich Duerrenmatt.

New York: Grove Press, (1966.) dj. SIGNED hardcover first edition - Includes both Vidal's rather controversial adaptation and the original play by Duerrenmatt. as well as the original cast list from the Broadway play. "Vidal has supplied a specially-written Preface for this edition of his play, in which he sets forth his reasons for the kind of adaptation he has made. At Mr. Vidal's suggestion, Duerrenmatt's Romulus the Great is given in translation from the original German by Gerhard Nellhaus for the reader who wishes to make his own judgment concerning the merits of the two plays." xv, 165 pp.

Condition: SIGNED by Vidal on the title page. Just about fine in a near fine dustjacket. Uncommon signed.