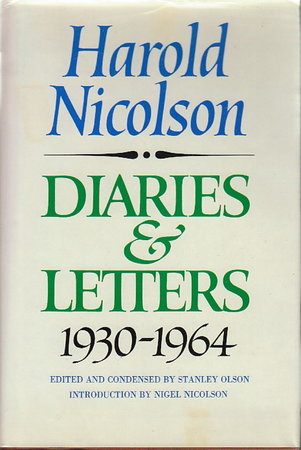 New York: Atheneum, 1980. dj. Hardcover first edition - Considered one of the most remarkable pictures of the period, incredibly detailed and astute, originally published in 3 volumes in 1968. Harold Nicolson was a member of Parliament from 1935 to 1945; a junior minister in Churchill's wartime government; a well-known writer, journalist and broadcaster; and the husband of the poet and novelist Vita Sackville-West. While this is a one-volume abridgement, but it also includes additional previously unpublished extracts from his letters and diaries. Index. 436 pp. ISBN: 0-689-110979.