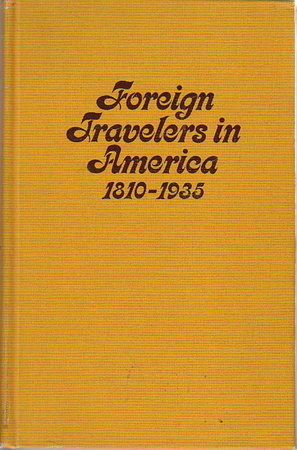 AMERICA, AND THE AMERICANS...By a Citizen of the World.

New York: Arno Press, 1974. Hardcover - A favorable account of his travels in the United States - he began by travelling to New York City, describing the public buildings, churches of various religions, politics and elections, libraries, auctions and more. His wanderings included Niagara, Buffalo, Philadelphia, Washington, Baltimore, Boston, Montreal and Quebec, and the subjects of his comments are equally varied - from Indians to Negroes, to boarding house life, burial practices, the zeal of the firemen in the cities, the new prison at Charleston just outside Boston, etc. Originally published anonymously in 1833 as "By a Citizen of the World" this has been attributed to Liverpool merchant James Boardman. A title in the Foreign Travelers in America 1810-1935 series. xi, 430 pp plus 2 pp list of the series. ISBN: 0-405-054432.

Condition: Ex-library with a missing front endpaper, but overall tight and sturdy in gold cloth with dark brown lettering. A clean copy with only a few markings. Uncommon.