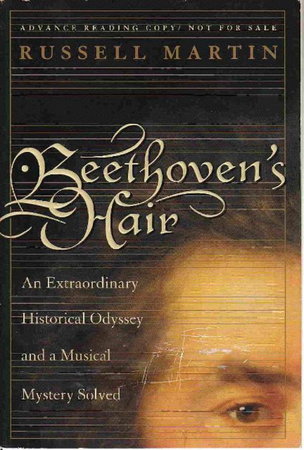 New York: Broadway Books, (2000.). First edition - From the cover: "An extraordinary historical odyssey and a musical mystery solved ...- As Ludwig van Beethoven lay dying in 1827, a young musician named Ferdinand Hiller came to pay his respects to the great composer. In the days after Beethoven's death, Hiller snipped a lock of his hair as a keepsake. This lock was passed down for more than a century through Hiller's family, until, during the second World War, it somehow found its way to the town of Gilleleje, in Nazi-occupied Denmark. There, it was given to a local doctor, Kay Fremming, who was deeply involved in the effort to provide aid for hundreds of frightened and hunted Jews. Who gave him the hair, and why? ...After his death, Fremming's daughter inherited the lock, and eventually put it up for sale at Sotheby's, where two American Beethoven enthusiasts, Ira Brilliant and Che Guevara, purchased it in 1994. Subsequently, they and others have instituted DNA and other tests in the hope of revealing the probable causes of the composer's famously bad health, his deafness, and his final demise." A fascinating historical treasure hunt. 242 pp.