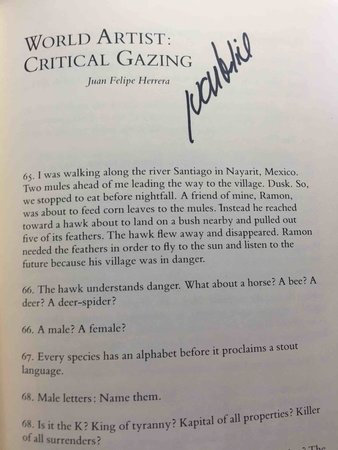 San Francisco: ZYZZYVA, Inc. 1988. SIGNED first edition - The third anniversary issue of this interesting and eclectic magazine. SIGNED by THREE poets: by Garrett Hongo at his poem "Jigoku"; by Juan Felipe Herrera at "World Artist: Critical Gazing" and by Kay Ryan at "Masterworks of MIng." Also included are works by Arturo Islas, Robert Peters, John Daniel (an article on the Turkey Press) and more. Art and photography by Catherine Nisbet, Yuji Morita, Stan Washburn and others. Cover by Harry Polkinhorn. 136 pp. We specialize in literary journals, and have many others - including many not yet catalogued and listed on line.

Condition: Near fine in stiff wrappers (sunning to spine and edges of cover.)