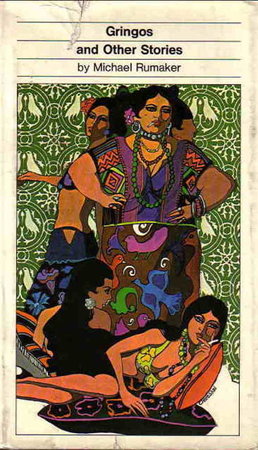 GRINGOS AND OTHER STORIES (Exit 3 and Other Stories in UK)

New York: Grove Press, (1987.) dj. Hardcover first edition - Rumaker's second book, first collection of short stories, very highly praised upon its appearance in England - "six of the most powerful American stories written in the past decade. In them Michael Rumaker probes the dark underside of the bright surface this country presents to the world as its official image. The stories are about the people who have, in Olson's term, been 'advertised out': soldiers, sailors, marines, bums, hoboes, wanderers, homosexuals, thieves, working stiffs - those who live on the delicate edge of poverty and despair." (from front flap of the dustjacket) This is perhaps the book on which Rumaker's reputation rests - in their minimalism, emphasis on action and dialogue, and the raw grittiness of life which they project, they both reflected the disillusionment of the beat writers and prefigured the works of writers like Raymond Carver and Tobias Wolff. 189 pp.