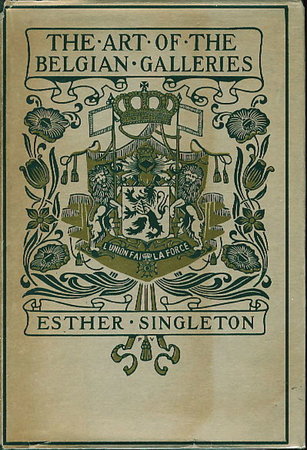 THE ART OF THE BELGIAN GALLERIES: Being a History of the Flemish School of Painting Illuminated and Demonstrated by Critical Descriptions of the Great Paintings in Bruges, Antwerp, Ghent, Brussels and Other Belgian Cities.

Boston: The Page Company, Publishers, (1909.) dj. Hardcover first edition - A title in the Art Galleries of Europe series, illustrated with many black and white glossy photographic plates of the paintings. In addition to writing extensively about European art, Singleton (along with Luke Vincent Lockwood) was among the first scholars to systematically study the English and Continental origins of American furniture and to develop the terminology still used for different furniture forms. In addition, she was a musician and musical critic, wrote poetry (she studied with Sidney Lanier), translated fairy tales, edited the series of "Famous... described by Great Writers," and much more. Her books were known for careful insight, historical research and artistic selection - while almost forgotten today, she has probably influenced American culture and collecting far more than we realize. Bound in green cloth with gilt lettering, red, black and gold Belgian coat-of-arms on the front cover, top edge gilt. 369 pp