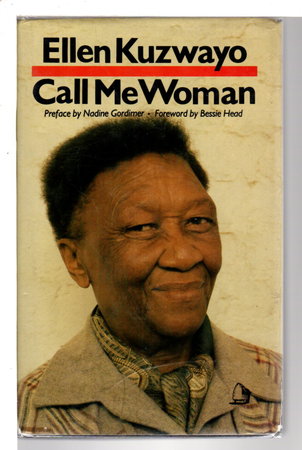 London: The Women's Press, (1985.) dj. Hardcover first edition - The autobiography of a woman whose entire life has been a testimony to courage, survival and devotion to others. In 1930, her family farm - one they had farmed for over 100 years - was taken from her when the area in which it was located was declared a "White Area" under the apartheid rule. For many years, she devoted her time to teaching, but, even though she was not a political radical, after the massacre of the students in Soweto, she became actively involved in the demonstrations and, at age 63, was detained for 5 months in 1977 under the so-called 'terrorism act' for offences which were never specified. In addition to her fight against apartheid, Kuzwayo also fought for equal rights for both men and women. In 1979, she was chosen Woman of the Year by the Johannesburg newspaper, The Star. This book is more than just her own story: it is also the larger story of the other women among her people who have to struggle to survive, to break free of traditional and restrictive roles and to pursue their own choices. Kuzwayo became the first black writer to be awarded the CNA Literary Prize, South AfricaÕs premier literary prize, for this work. Includes a foreword by Bessie Head, and a preface by Nadine Gordimer (who states "This is a true testimony from a wonderful woman. .. she is one of those people who give me faith in the new and different South Africa they will create." Illustrated with black and white photographs. Includes lists of South African black women lawyers and medical doctors. 266 pp. ISBN: 0-7043-28488.