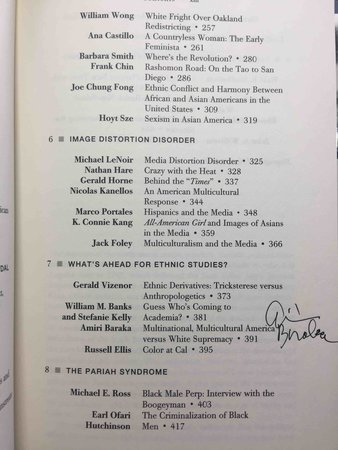 New York: Viking, (1997.) dj. SIGNED hardcover first edition - SIGNED by THREE authors: by Baraka next to the title of his contribution 'Multinational, Multicultural America vs White Supremacy" in the table of contents and by Juan Felipe Herrera at "The Colored Trickster and the Frida Painter." and by Frank Chin at his contribution "Rashomon Road.". An uncommon and unpredictable anthology bringing together writers of all colors and ethnic backgrounds who discuss just what American culture is today, what it can be, and the problems in our understanding of what it means to be an American. In addition to the contributors listed above, this includes essays by Miguel Algarin, Frank Chin, Robert Eliot Fox, Juan Felipe Herrera, Maulena Karenga, Barbara Smith, William Wong, Gerald Horne, John A Williams and many others. Brief biographical notes. xxvii, 467 pp. ISBN: 0-670-867535.