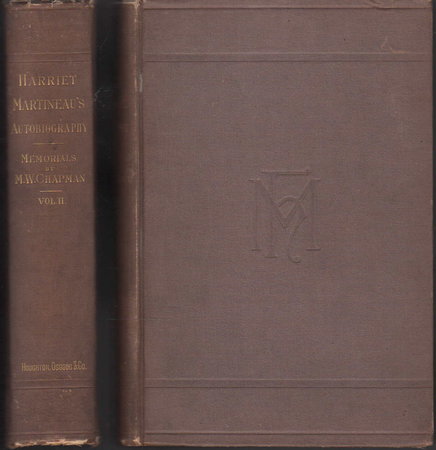 Edition: Fourth edition (first published in the US in 1877.)

Boston: Houghton, Osgood and Company, 1879. Hardcover - The autobiography of one of the most remarkable women of the 19th century, edited and with a volume of Memorials by her long-time friend, the abolitionist, Maria Weston Chapman. In 1855, Martineau was diagnosed with a fatal disease and she wrote the first two volumes of this autobiography in 3 months, and had it printed up for immediate release upon her death - an event which came 21 years later. Originally published in 3 volumes, this American edition is complete in 2 volumes. Despite a life-long struggle with her health, and gradually increasing deafness beginning in childhood, Martineau's output and her influence was prodigious - the author of approximately 100 books and 1500 to 2000 editorials and articles, she was known for popularizing the ideas of James Mill, Adam Smith, Thomas Malthus, Jeremy Bentley and others. Gayle Graham Yates describes her as a protogenitor of the feminist movement: "thirty years before the beginning of an organized women's rights campaign in England, Harriet Martineau was a wide-ranging, progressive, and thorough-going feminist in nearly every sense in which that word is used today. Embracing practically every cause clearly in favor of woman's advancement in her lifetime [such as education, work, and marriage] and taking up certain issues that were not so definitely identified as parts of the feminist fabric until the 1960s and 1970s. Martineau was a giant among early feminists. . . . She was the first Englishwoman to make the analogy between the American woman's lot and the slave's." Illustrated with several plates. Volume 1: x, 594 pp; Volume 2: vi, 596 pp. This copy is an interesting association copy, it bears the name and annotations of G. R. Wieland, the noted paleobotanist, whose papers at Yale University include the manuscript of an article entitled 'Harriet Martineau's American Visit' - an indication of his serious interest in her life.

Condition: Good condition overall in embossed brown cloth with gilt titling on the spine. Foxing to the edges of the textblock and especially to the plates and tissue guard (the text is almost unaffected), previous owners' names (with the earliest being that of Pauline Esselborn, perhaps the wife of German immigrant and Ohio winemaker, Julius Esselborn), a little scattered pencilled underlining and marginal notations (erasable) and comments in both ink and pencil in the hand of G. R. Wieland on the blank rear pages.