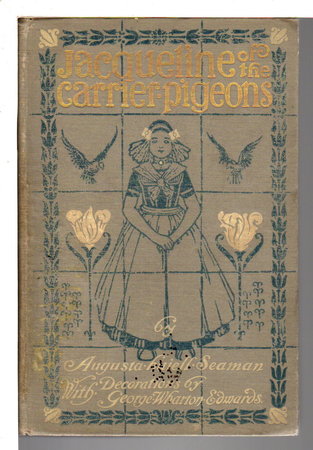 JACQUELINE OF THE CARRIER PIGEONS.

New York: Sturgis and Walton Company, 1910. Hardcover first edition - Although there are some suspenseful elements to this story of the siege of Leiden in the 16th century, it is a historical novel rather than a mystery story. The heroic actions of the young boy are based on a true story, although the character of his sister, Jacqueline, is fictitious. Introduction by noted historian William Elliot Griffis and a decorative cover, title page, frontispiece and 3 plates by George Wharton Edwards Bound in beige cloth with a very appealing dark gray and white stylized picture of a young girl, flanked by tulips and pigeons, inside a decorative border . Lettering in gilt and white, measuring just 7 1/2 by 5 1/4 inches. 302 pp.

Condition: Good only (front hinge cracked, previous owner's name, some wear and soiling to the covers, although the lettering on the spine is still legible and the front cover illustration still attractive.) While this title was reprinted many times - including at least 4 times by Sturgis and Walton, the original publishers - the true first printing is very uncommon.