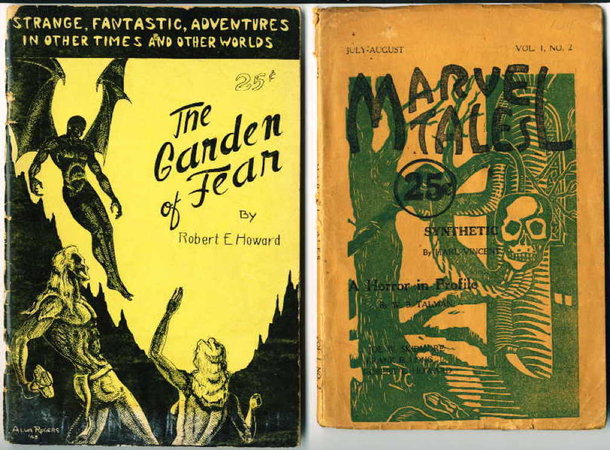 Everett, Pennsylvania: Fantasy Publications, 1934. First edition - A very scarce and fragile issue, primarily notable for containing the first appearance of Howard's "The Garden of Fear," the first story in the James Allison series. This second issue of the short-lived Marvel Tales series, published by William L. Crawford (who also owned a printing press) had 3 variant covers - in different colors and on different paper stock: this copy is orange with a green woodcut illustration and black lettering superimposed on the illustration. Mike Ashley in his article on Marvel Tales describes the importance of Crawford as an editor who tried to shape the future of SF, and as one who was able to prove that there were writers in science fiction who were willing to challenge the establishment and break out of the rut of formula fiction (Tymm and Ashley, editors "Science Fiction, Fantasy and Weird Fiction Magazines" pp 401-404) Other stories in this issue are "Synthetic" by Harl Vincent, "The Dark Beasts" by Frank B. Long, Jr., "Antidote" by Robert M. Hyatt, "The Torch of Life" by Joe W. Skidmore and "A Horror in Profile" by Wilfred Blanch Talman, plus editorial scribblings and poems. Illustrated. 60 pp. Also included is "The Garden of Fear and Other Stories of the Bizarre and Fantastic" by Robert E. Howard, an anthology published in 1945 by Crawford Publishing House of Los Angeles; this is the 2nd appearance of this story and the first in book form. Other stories in the anthology are 'The Man with the Hour Glass' by L.A. Eshbach, 'Celephais' by H.P. Lovecraft, 'Mars Colonizes' by Miles J. Breuer, and 'The Golden Bough' by David H. Keller. Cover art by Alva Rogers. 80 pp, bound in stapled wrappers.

Condition: Both items are in good only condition with toning to the pages, some wear to the spines. The Marvel Tales has a triangular piece missing from the upper corner of the back cover; the Crawford publication, in yellow wrappers, has some dampstaining to the bottom edge (not noticeable on the front cover), previous owner's name taped onto the title page.