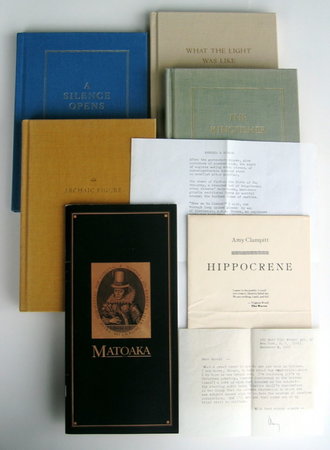 Small archive including HIPPOCRENE, MATOAKA, THE KINGFISHER, WHAT THE LIGHT WAS LIKE, ARCHAIC FIGURE, and THE SILENCE OPENS, some signed, others with notes laid in, typed poem DUNDEE.

New York: Knopf and others, 1983. SIGNED hardcover first edition - A unique group of items with a significant association to Clampitt's life. Included are four of her hardcover books published by Knopf - The Kingfisher, What the Light Was Like, Archaic Figure and The Silence Opens. Kingfisher is a 2nd printing (before publication), the rest are first printings; none have dust jackets (possibly as sent by the publisher or possibly removed by the recipient.) Tipped onto the front endpaper of 'The Kingfisher' is a small handwritten note "For Harold Guthrie - who opened the excitements of English poetry for me so many years ago, and whose friendship I treasure - with thanks and best wishes always." SIGNED by Clampitt in full and dated in December 1982. 'Archaic Figure' and 'What the Light Was Like' have tipped-in printed cards from the publisher stating "with the compliments of the author" (one of those cards has "Harold Guthrie "handwritten on it); 'The Silence Opens' has a similar card, loosely laid in. Also included is a brief typed signed note dated in December 1983, referring both to seeing Guthrie recently and to the limited edition broadside of "Hippocrene" which she was sending as a Christmas greeting. The note also states that she is enclosing a poem "that comes out of my brief visit to Scotland." The photocopied typed poem "Dundee: A Homage" fills one side of an 8 1/2 by 11 inch sheet (folded in four for mailing). Hippocrene is on a single sheet 17" by 11" folded to make 4 page broadside, printed in an edition of 220 copies on the occasion of the poet reading at Bennington College in November 17, 1983. It has an additional fold line across the middle (probably to fit in a smaller envelope for mailing) - As far as we have been able to determine, "Dundee" has not been published in book form, at least - The final item is a copy of "Matoaka: A Poem in Celebration of the Tercentary of the College of William and Mary College in Virginia" in 1993. This is INSCRIBED by Clampitt to Guthrie 'with longtime and continuing esteem' and dated in February, 1993. While Clampitt started writing poetry seriously in the 1970's, and had been published in magazines, including the New Yorker, as well as publishing the chapbook 'Multitudes, Multitudes,' it was the appearance of her first collection with Knopf - The Kingfisher - in 1983, when she was already in her 60's, that brought her acclaim. This lot covers the entire span of Clampitt's most productive last years before her death - and they are evidence on an on-going and warm relationship with the teacher from her hometown of New Providence, Iowa, the teacher whom she honored publicly in 1984 when she wrote (at the end of 'A Homage to John Keats'): "I wish to . . . pay tribute to Harold Guthrie, in whose class at New Providence, Iowa, I had my introduction to the poetry of Keats." The two very uncommon published items, as well as the short notes and the poem "Dundee", make this lot interesting in itself, but the real value lies in the spirit behind these gifts and notes to Guthrie - her teacher more than 40 years before.

Condition: Most fine or near fine condition, some with folds from mailing.