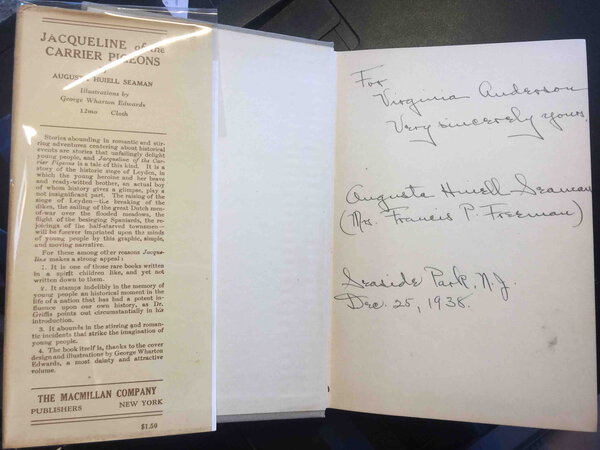 JACQUELINE OF THE CARRIER PIGEONS.

New York: Macmillan, 1919. dj. SIGNED hardcover - INSCRIBED by the author on the front free endpaper and dated Seaside Park, NJ, Dec 25, 1938. Seaman's first published book, originally published in 1910. Although there are some suspenseful elements to this story of the siege of Leiden in the 16th century, it is a historical novel rather than a mystery story. The heroic actions of the young boy are based on a true story, but the character of his sister, Jacqueline, is fictitious. Introduction by noted historian William Elliot Griffis and a decorative title page and frontispiece by George Wharton Edwards. Bound in plain beige cloth with gilt lettering on the spine. The same size as the original Sturgis and Walton edition, measuring just 7 1/2 by 5 1/4 inches, but slightly thinner at 1 1/8 inches. Although the ilustrated title page includes the date of 1919 (MXMXIX), this was probably a slightly later printing. 302 pp.

Condition: Very near fine in a very good dustjacket, which reproduces the illustration on the title page on the front cover. Some chipping to the edges of the dj, and loss of about 1/4 inch at the top of the spine of the dj. Nevertheless, it is very uncommon to find these early printings in a dustjacket and in this lovely condition, and especially so signed by the author.