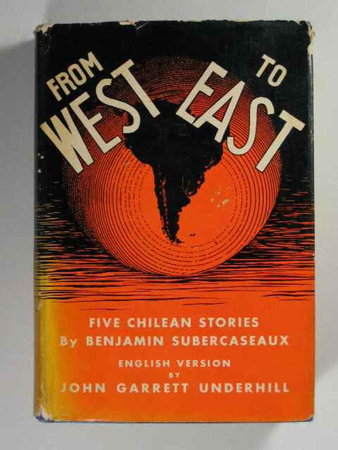 FROM WEST TO EAST: Five Stories.

New York: Putnam, 1940. dj. First edition - Collection of 5 long stories by this Chilean author. Born in 1902 in Santiago de Chile in anold established family of mixed French and Basque origin, he trained first as a doctor and later became a psychologist. His writings reflect his varied interests and range from poetry to psychology, Chilean current affairs and fiction; these stories were written after a period of 6 years spent traveling in North Africa and the near East. Four of them are colorful tales of seamen and the Pacific, the last 'Rahab' is a biblical story set in Jordan. Translated and with a foreword by John Garrett Underhill. This is the first of his books to appear in the United States; .an uncommon work by an important Chilean writer. 214 pp.