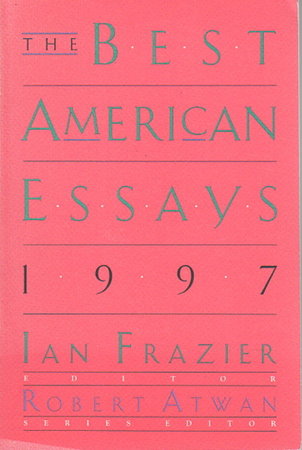 Boston: Houghton Mifflin, 1997. SIGNED first edition - The 12th in the series. SIGNED by Bernard Cooper at his essay on mazes in 'Labyrinthine', These books are notable for the amount of good - and interesting -writing compressed into one volume. In addition to the contributions by Thomas McGuane, Cynthia Ozick, Richard Ford, Charles Simic, Dagoberto Gilb, some other selections include Debra Dickerson on 'Who Shot Johnny?' a moving indictment of the world that left her 17 year old nephew paralyzed, Susan Sontag on 'A Century of Cinema; and Joy Williams on 'The Case Against Babies' and much more. Introduction by Frazier and brief biographies of the contributors. 226 pp. ISBN: 0-395-856957.