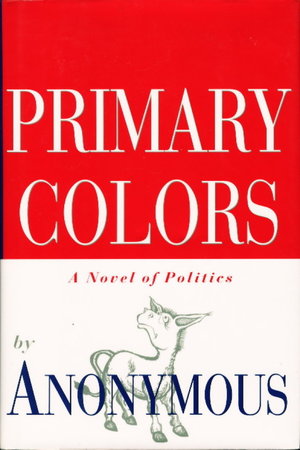 PRIMARY COLORS: A Novel of Politics.

New York: Random House, 1996. dj. SIGNED hardcover first edition - Best selling novel, an account of the presidential campaign of a governor of a small southern state, the subject of much controversy and the basis of the movie of the same name starring John Travolta. Went quickly into many later printings, but despite a lot of speculation, the anonymity of the author was preserved for many months. SIGNED by the author on the title page as "Anonymous JK" 366 pp. ISBN: 0-679-448594.

Condition: Very near fine in a fine dustjacket.