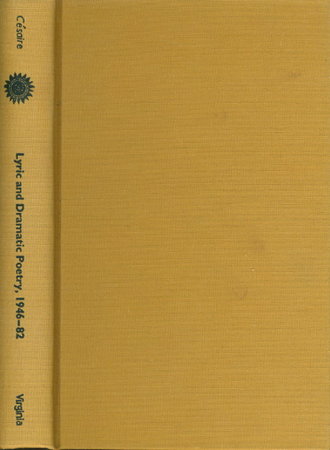 Charlottesville, VA: University Press of Virginia, 1990. dj. Hardcover first edition - The first appearance in English of two very significant works by Cesaire: the long dramatic poem 'Et les chiens se taisaient' (And the Dogs Were Silent) and 'moi, laminaire' and other poems. 'And the Dogs Were Silent' appears only in English in this volume; the shorter poems are in both French and English. Introduction by A. James Arnold. A title in the Caraf Series which consists of works of Caribbean and African Literature translated from the French. 235 pages. ISBN: 0-8139-12563.

Condition: Fine (as new ) in gold cloth, no dustjacket as issued.