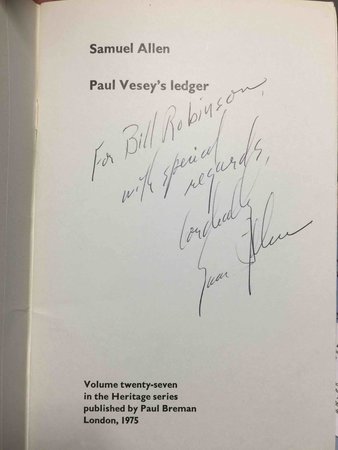 Edition: First printing in wrappers. No hardcover edition. Volume 27 in the Heritage series.

London: Paul Bremen Ltd., 1975. SIGNED first edition - An uncommon work by this African American poet - his first book was published in German under the pseudonym of Paul Vesey, and his second book, published by Diana DiPrima under his real name bore the same title, although most of the poems were new. This collection contains 18 poems from an unpublished set which bore the subtitle "An Afro-American Experience." This copy is INSCRIBED to a fellow poet,"For Bill Robinson with special regards, Cordially, Sam Allen."

Condition: Near fine condition in stapled wrappers with photograph of Allen on front cover. Printed on blue paper.