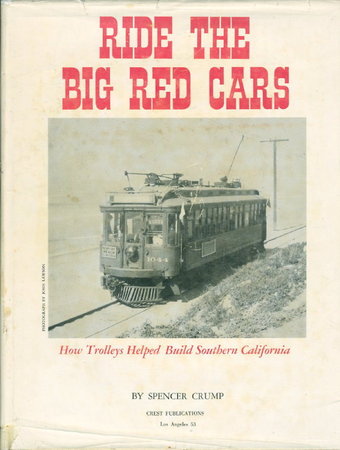 Los Angeles: Crest Publications, 1962. dj. Hardcover first edition - The history of the Pacific Electric, starting in the late 1880's and which was at its peak the largest interurban system in the world, and its effect on the cities thru which it ran - and also the story of the battles between the railroad tycoons when Henry Huntington wanted to create a system spanning California - and finally also the story of the decline of these systems. A large format volume, with over 100 illustrations and photographs. 240 pages.

Condition: Near fine in a good+ dustjacket (some soiling to the lower edges of the boards, dj is price-clipped, and has some edgewear including the loss of about 1/2 inch at the bottom of the spine and some chips on the upper edge of the rear cover, and some light foxing to the dj . Still, a very nice copy of the rather uncommon first edition of a fascinating book and the classic study of these cars.